Mr. Hubbard’s technologies for drug rehabilitation and detoxification, criminal reform, learning, literacy and his common sense guide to better living—The Way to Happiness—have touched close to a billion lives in some 200 nations. 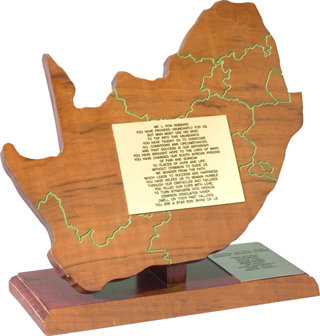 Presented to L. Ron Hubbard by the inmates of South Africa’s Leeuwkop Prison in acknowledgment of his criminal reform technology: “You have brought hope to the lives of many. You have changed our South African prisons of pain and sorrow to places of hope and life.”

Just one example amongst many is Leeuwkop Prison—the notoriously ruthless maximum-security facility outside Johannesburg, South Africa. Following implementation of Criminon—the rehabilitation program based on L. Ron Hubbard’s breakthroughs in the field—cellblock violence was all but eliminated. In acknowledgment of the astonishing impact of Mr. Hubbard’s technology, Leeuwkop inmates presented him with the following award, inscribed in part: “You have brought hope to the lives of many. You have changed our South African prisons of pain and sorrow to places of hope and life.”

In yet another prison, equally astonishing results prompted Panama’s Chief of Internal Security to bestow an official recognition upon L. Ron Hubbard for “his helpful humanitarian work and functional spiritual technology which is helping every person in the custody of the Centro Femenino de Rehabilitacion Cecilia Orillac de Chiari Prison, as well as creating new families.”

Official Recognition — Dangerous Drugs Board, Office of the Philippine President

Awarded to Mr. Hubbard by the Chairman of the Dangerous Drugs Board, for “his humanitarian work in the field of drug education and drug rehabilitation and for his relevant technologies which are adopted and implemented in the Philippines...thus contributing immeasurably to the successful pursuit of our noble vision of a drug-free country.”

Then there is L. Ron Hubbard’s technology for drug rehabilitation and detoxification, now in operation across some 50 nations. Prompted by the effectiveness and success of these programs, the Chairman of the Philippines’ Dangerous Drugs Board presented L. Ron Hubbard with a plaque formally acknowledging him for “his humanitarian work in the field of drug education and drug rehabilitation and for his relevant technologies which are adopted and implemented in the Philippines...thus contributing immeasurably to the successful pursuit of our noble vision of a drug-free country.”

Bestowed upon L. Ron Hubbard by city firefighters following the success of the New York Rescue Workers Detoxification Project, and inscribed: “To our brother, L. Ron Hubbard, from your brothers at the New York City Fire Department, we honor you with this helmet, a symbol of our motto, ‘to protect life and property’ which the legacy of your technology embodies,
2 August 2003.”

Bestowed upon Mr. Hubbard for his humanitarian work in the fields of education and literacy.

Mr. Hubbard’s detoxification regimen is likewise recognized for miraculous results in the rehabilitation of New York firefighters and rescue workers suffering in the wake of 9/11. Specifically, the New York Rescue Workers Detoxification Project—employing L. Ron Hubbard’s groundbreaking technology—addressed the physical problems of those exposed to unprecedented levels of toxic dust, fumes and vapor at Ground Zero. Following the project’s unmitigated success, NY City firefighters bestowed upon Mr. Hubbard an Honorary New York Firefighter’s Helmet, inscribed with the following: “To our brother, L. Ron Hubbard, from your brothers at the New York City Fire Department, we honor you with this helmet, a symbol of our motto, ‘to protect life and property’ which the legacy of your technology embodies, 2 August 2003.”

As for L. Ron Hubbard’s educational technology, not only is it currently applied in some 70 countries on six continents, but with more than 30 million students having participated in those programs, the influence of Mr. Hubbard’s breakthroughs is felt across entire nations.

Accordingly, L. Ron Hubbard has received the W.E.B. DuBois Outstanding Leadership Award from the National Association for the Advancement of Colored People (NAACP), as well as an official recognition from the Congress on Racial Equality (CORE) for innovative technology which has “brought renewed hope to children and adults across the nation through improved literacy and understanding.”

And while it would be impossible to list the thousands of recognitions Mr. Hubbard has received for his humanitarian works—now employed by over 1,800 government agencies—following is but an abridged selection of those recognitions, proclamations and awards:

International Civil Golden Award — Civil Forum Nepal: Awarded to L. Ron Hubbard for “his outstanding contribution to the people of Nepal in the fields of Education, Drug Rehabilitation and for the Spiritual Healing Technology of Dianetics.”

Human Rights and Peace Award — Universal Peace Federation: Presented to Mr. Hubbard for his work as a “great humanitarian and peace builder.”

Lifetime Achievement Award — Boy Scouts of America: Presented to L. Ron Hubbard “for his humanitarian work for the betterment of Mankind.”

Fellow — International Oceanographic Foundation: Awarded for Mr. Hubbard’s contribution to the advancement and extension of knowledge and discovery in oceanography and the marine sciences.

Certificate of Appreciation — Ministry of Education of Venezuela: Presented in recognition of Mr. Hubbard’s teaching technology.

Certificate of Acknowledgment — Ministry of Justice of Venezuela: In appreciation for Mr. Hubbard’s developments in the field of communication, used in Venezuelan juvenile justice programs.

Silver Cup — Council of the Region of Marche, Italy: Awarded in recognition of L. Ron Hubbard as an educator and philosopher.

World Peace Day Award — City of Sacramento, California: In recognition of L. Ron Hubbard as the Founder of Dianetics and Scientology with the vision of a world without war and crime.

Certificate of Commendation — City of Washington, DC: In acknowledgment of L. Ron Hubbard for the precept, “Safeguard and Improve Your Environment,” from The Way to Happiness.

Recognition — Commission of Education, Legislative Assembly of Mexico City: In recognition of L. Ron Hubbard for his technology of study.

Official Recognition — Secretary of State for Education, The Gambia: Acknowledging the gifts of Mr. Hubbard’s technology on behalf of the peoples of The Gambia.

Certificate of Recognition — National Polytechnic Institute of Mexico: In acknowledgment for L. Ron Hubbard’s development of a technology for study.

Acknowledgment — Foreign Relations Department, Nepal: In recognition to L. Ron Hubbard for his development of a philosophy and technology for study.

House Resolution — Speaker of the Puerto Rico House of Representatives: A resolution was presented to L. Ron Hubbard for his humanitarian works in the fields of detoxification and criminal reform.

Citation — Commonwealth of Pennsylvania House of Representatives: Presented in recognition of L. Ron Hubbard’s lifetime of achievement and as a Freedom Fighter.

Academic Diploma — World Academy for Science, Fine Arts and Culture, Saint Petersburg, Russia: Presented for Mr. Hubbard’s contribution as a writer and a scientist, who made fundamental discoveries in the field of the human mind.

Eagle Claw and Tail Feather Recognition — Samson Cree Nation: Bestowed upon L. Ron Hubbard by the Chief of the Samson Cree Nation. Presented as the highest honor given by the Cree as the Eagle flies closest to the Creator.

Freedom Statue — Probation Officers of South Africa: Dedicated to L. Ron Hubbard in recognition of his developments in the field of criminal reform.

Resolution — Senate of Puerto Rico: For L. Ron Hubbard’s contribution to Mankind, proclaiming that his humanitarian and philosophic ideas are a motivation and example for future generations. It was passed unanimously by the 29 members of the Puerto Rican Senate and signed by the President of the Senate.

This all-encompassing compendium for The L. Ron Hubbard Series highlights all he achieved as a humanitarian, educator, administrator, philosopher and artist. It further presents the only complete chronological overview of his life and achievements.

Gain a sweeping perspective on L. Ron Hubbard, Educator and his deeply illuminating development of Study Technology—the only technology for learning and literacy capable of reversing an educational tailspin and cultural decay.

IMAGES OF A LIFETIME: A PHOTOGRAPHIC BIOGRAPHY

This stunning photographic chronology presents the intimate story of L. Ron Hubbard’s life through meticulously restored images and detailed anecdotal captions. The newly updated and expanded Images of a Lifetime contains over 500 photographs—many of which are rare and never previously seen.